On MWC2015, Huawei not only released the round Smart Watch, but also released a new large 7.0 inch screen smartphone MediaPad X2. On detailed configuration, the device uses a 7.0 inch 1080p screen. The material is IPS and it also adopts LTPS technology which claimed that it would make the colors of the...
Read all news (35)...

This is a flash hands on review to give you the chance to see what the phone is all about as soon as possible. Stay tuned as we'll be expanding and upgrading this review very shortly with more info. Smartphone manufacturers have been pushing the boundaries of the 'phablet' for a while, and the Huawei...
Read all reviews (1)...

Huawei MediaPad X2 New Smartphone Features Review 2015 For More Information :- http://www.phonenews.in MediaPad X2 comes with a 7-inch LPTS display with a resolution of 1920x1200 pixels which covers more than 80% of the device's front. Unlike the Mediapad X1, the Mediapad X2 boasts an "ultra" octa-core, 64-bit Kirin 930 chipset clocked in at 2.0Ghz. The 13MP camera at the back boasts a dedicated ISP chip, which is said to generally improve the low-light performance of the tablets's camera sensor and also bear other goodies to the table. The front-facing snapper is a 5MP one. The device will be available in two versions - one with 2GB of RAM/16GB of native storage and a beefier one with 3GB of RAM/32GB of available storage. Connectivity-wise, both of these are dual-SIM slates with LTE Cat.6. PT2M4S

Huawei MediaPad X2 is a 4G LTE 7-inch stunner Huawei MediaPad X2 is a 4G LTE 7-inch stunner For more Latest Tech News and Product reviews SUBSCRIBE to http://www.youtube.com/user/TechyGUYS Huawei is calling its MediaPad X2 a phablet -- a divisive term for a tablet with phone capabilities. Pegging the device as a phone conveniently makes it the "world's slimmest 7-inch phablet" at 7.28mm thin, but the MediaPad X2 is far from being all beauty and no brains. The dual-SIM-packing Huawei gadget houses a powerful 2.0GHz Kirin 930 chipset with a 64-bit eight-core CPU and Mali-T628 GPU. It comes in two versions: a model with 2GB of RAM and 16GB internal storage that dons a sliver aluminum back, and a gold version with 3GB of RAM and 32GB of internal storage. The 7-inch IPS screen features a crisp 1,200x1,920-pixel resolution with 323 pixels per inch and wide 178-degree viewing angles. According to Huawai, its 5,000mAh battery lasts an entire day with heavy use -- pretty impressive for any mobile gadget, especially one running on a LTE network. There's even an impressive pair of cameras on the MediaPad X2 -- on paper, that is. Most tablet cameras slack behind the superior quality of smartphone cameras, but the 13-megapixel rear camera and 5-megapixel front-facing camera sound promising. Both attempt to better tackle low-lighting situations with a F/2.4 aperture and the front-facing camera rocks a 22mm wide angle that'll give your selfie stick a run for its money. Thanks to a steady influx of 8- to 9-inch tablets and the increasing presence of large-screen smartphones, 7-inch tablets have dwindled in availability. The Huawei MediaPad X2 is a nice revival of the once popular form factor and its 4G LTE capabilities are the icing on a cake of solid specs. Pricing and availability have yet to be announced, but check back with CNET for updates and read up on the rest of the goodies coming out of Mobile World Congress 2015. PT2M14S

Huawei MediaPad X2 Hands On + Quick Review The Huawei MediaPad X2 is a new 7 inch tablet with Android 5.0 Lollipop that comes with LTE and a fullhd display. You can use it as a smartphone and make phone calls as well! PT2M52S 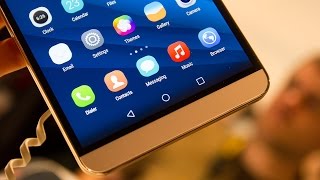