Kingzone Z1 Is Close To A Release

Now Kingzone have been quite a popular brand in 2014, quickly gaining massive fame with their K1 which some call the very first MT6592 flagship because of its amazing specs and high built quality. Unfortunately Kingzone haven’t managed to repeat this success so far, as their N3 was more of a failure....
2015-02-23 20:37:09

Late last year phone makers started to promote their 64bit line-up and the devices have been fast to launch. Following in the volley of launches is the MT6752 Kingzone Z1. Cast your mind back to last year and you may remember Kingzone. The Chinese phone maker had a major hit on their hands with the...
2015-02-23 17:32:23

Kingzone Z1 Up For Pre-Order Now

The new Mediatek 64-bit chipsets kicked off quite some hype, that’s something you can’t deny. And this for a reason, as the performance is just outstanding, kicking Qualcomm out of the arena and enabling manufacturers to build better devices than ever before at the comparably low price-levels we are...
2015-02-27 06:51:56

Kingzone has announced earlier in last December that it would enther the 64bit smartphone market. So the newest 4G product Z1 was born. This product was launched recently. Comparing to the earlier advertising, the new Kingzone Z1 was upgraded a lot, especially the dimension which is rather stunning. On...
2015-03-02 15:21:39

Kingzone Z1 Review: Hot or not?

When we recently reviewed the Kingzone N3 Plus we have been shocked about the fact that Kingzone didn’t seem to learn anything from the miserably performing and selling Kingzone N3. It still had a lot of annoying bugs, and even worse, Kingzone again claimed a false battery capacity: Instead of the promised...
2015-04-16 18:35:35

Kingzone isn't a mobile phone brand we've heard of in the UK before, but we definitely want to hear more about it. Find out why in our Kingzone Z1 phablet review.  It's not often we're blown away by a mid-range smartphone. Supplied to us by Coolicool.com, the Z1 has an awful lot going for it. At less...
Read all reviews (2)...

KINGZONE Z1 New FlagShip Full Review-4G LTE MT6752 5.5" HD Screen Got it from here:http://www.coolicool.com/kingzone-z1-mtk6752-octa-core-55-inch-ips-ogs-hd-screen-android-44-4g-lte-android-smartphone-g-35420 Free shipping worldwide andSave $10 with coupon code:CICZ110 Kingzone Z1 like many Chinese flagship phones it benefits from boasting a 64bit chipset, and native LTE support. Some of the highlights of the Z1 include a 7.5mm body thickness,boasts a metal chassis, on to which they have bolted on a 5.5-inch HD display from JDI, 13 mega-pixel rear camera and 8 mega-pixel front. Picture Samples can be found here:http://goo.gl/pq4GWM Highlights - 5.5 Inch Corning Gorilla Glass 3 Screen, 1280*720 Pixels - MTK6752 1.7GHz 64bit Octa Core - Band: GSM 850/900/1800/1900MHz, WCDMA 850/900/1900/2100MHz, FDD-LTE 800/1800/2100/2600MHz, Support 2G & 3G & 4G LTE Network - 2GB RAM + 16GB ROM - 13 MP Back Camera + 8 MP Front Camera - Android 4.4 System Free shipping worldwide and Save $3 with coupon code:youtube Coolicool always focus on your E-life and offer excellent&hot Android phones and Tablet PC, other electronic gadgets. If you have any question or other suggestion about our video, do not hesitate to comment below and we'll reply you soon. Subscribe our channel if you like it, more big-save coupons and free mobile phones and tablet PCs will be offered. More Android SmartPhones:http://www.coolicool.com/ Our Facebook:http://on.fb.me/1Bkc8fd Our Twitter:http://bit.ly/1pivaNg Our Google+:http://bit.ly/1rkSDTJ PT4M24S 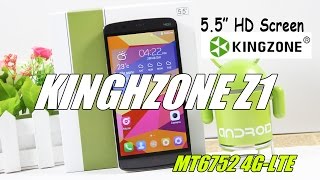 Amazing OctaCore Smartphone! KingZone K1 NFC&OTG&Wireless Charging 14.0MP Click here to buy：http://www.antelife.com/kingzone-k1-smartphone-with-android-4-3-mtk6592-octa-core-5-5inch-1080p-ltps-ogs-screen-2gb-16gb-dual-camera-8-0-14-0mp-nfc-otg-wireless-charging-6-8mm-black.html Price:269.0$ Only for a day Free shipping worldwide and save $2 with coupon code: youtube Dont't miss it. Original Kingzone K1 Smartphone MTK6592 Octa Core 1.7GHz Android 4.2 2GB/16GB 5.5 inch FHD Screen 1920 x1080 pixels Support NFC /OTG/Air Gesture Wireless charging 8.0MP+14.0MP Back camera 2500mAh Battery The Price will changed time to time,Click the links get detail imformation. Antelife always focus on your E-life and offer excellent&hot Android phones and Tablet PC, other electronic gadgets. Our BBS: http://bbs.antelife.com/forum.php Our Blog: http://www.androidgroupon.com/ Our Facebook: https://www.facebook.com/AntElifecom If you have any question or other suggestion about our video, do not hesitate to comment below and we'll reply you soon. Subscribe our channel if you like it, more big-save coupons and free mobile phones and tablet PCs will be offered. PT6M26S 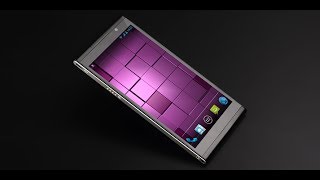 Kingzone K1 Turbo: Unboxing and Review/Test - Electrofame Le Kingzone K1 Turbo is very complete and powerful with a great 5.5 inches screen. Furthermore it has NFC and wireless charging (the last one needs a special case back cover. This smartphone is available on our website for more info: http://www.electrofame.com/smartphone-china-android/kingzone-smartphone-china-buy-online/kingzone-k1-turbo-octacore-nfc-otg-wireless-charging-metal-housing-buy PT23M21S 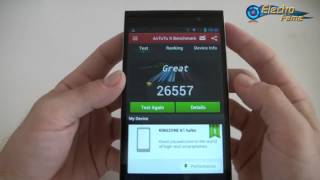