Hands on with the Lenovo A7000

Never autoplay videos Lenovo may not have a brought a flagship device to MWC 2015, but the company did decide to fortify its mid-range portfolio with some great tablets and smartphones, and even a portable projector. All of these products offer something beyond their otherwise mid-range, but budget-friendly,...
2015-03-02 17:03:45

At the Mobile World Congress today, Lenovo expanded its Android smartphone lineup by announcing two new smartphones – Vibe Shot and the A7000. The Lenovo Vibe Shot is the company’s first camera-centric smartphone and comes with a back designed to look more like a traditional point and shoot camera. The...
Read all news (127)...

Overview Display Power Camera Connectivity Battery Price Pros and Cons Other features Comparison Resources Lenovo A7000 is a 5.5 inch device having 720 x 1280 pixel resolution display. It is running on Lollipop OS. It is powered by Octa-core 1.5 GHz processor along with 2GB RAM, delivers great performance....
2015-05-07 10:25:19

Lenovo has geared up its inventory of smartphones that lies under sub-INR 10K category. With already a cheapest 4G LTE enabled smartphone (A6000) present in the same range, Lenovo decided to be more aggressive about its competition in India. And here we are with A7000, only just about a couple of months...
2015-05-09 11:33:04

Lenovo A7000 Review: Multimedia Phablet on a Budget

As phones started becoming smart, people discovered they could do much more than just make calls. Today, there are many who use a phone to surf the Web, chat with people using messenger apps, listen to music, watch movies, and play games. These capabilities don't require high-end hardware anymore. Lenovo...
2015-05-09 10:32:40

Lenovo and Huawei have been coming up with some very decent affordable smartphones just lately, with two examples being the A7000 and the Honor 4X respectively. They are closely priced and have quite a lot of specs similarities, so may both be on some buyer’s shortlists. If you’re a fan of mobile gaming...
Read all reviews (6)...

Should You Upgrade From Moto E to Lenovo A7000?

The Lenovo A7000 is finally here, and the specifications show it is far better than the Motorola Moto E smartphone. However, many would like to know whether the Lenovo A7000 is worth upgrading. Click Here For The Latest Smartphone Gallery To be honest, the Lenovo A7000 appears to be a far superior...
Read all howto (1)...

Lenovo A7000 4G LTE New Smartphone First Look & Review Check out Lenovo has announced the A7000 smartphone, successor of its A6000 at the MWC 2015. It has a 5.5-inch HD screen, is powered by a 1.5GHz Octa-Core MediaTek MT6752M 64-bit processor and runs on Android 5.0 (Lollipop). It has a 8-megapixel rear camera with LED flash and a 5-megapixel front-facing camera. Lenovo A7000 vs. Lenovo A6000 - https://www.youtube.com/watch?v=AO-G9847B-Y It has 2GB RAM, 8GB of internal storage with expansion slot. It has dual SIM support and 4G LTE support. It is also the world’s first smartphone with Dolby ATMOS support, offering an immersive audio experience and more attractive features. The Lenovo A7000 comes in Onyx Black and Pearl White colors and starts at $169 (Rs. 10,450 approx.). PT2M37S

Lenovo A7000 hands-on Live from MWC 2015, PhoneArena presents a hands-on video of the Lenovo A7000. http://www.phonearena.com/news/Lenovo-A7000-hands-on_id66537 -------- PhoneArena.com is your ultimate source of mobile tech news, reviews, and info. The PhoneArena YouTube channel delivers a vast range of smartphone, tablet, and accessory video reviews, in addition to regular hands-on, unboxing, and other uploads. Visit PhoneArena.com: http://www.phonearena.com/ Check out the YouTube channel: http://www.youtube.com/user/PhoneArena PT2M38S 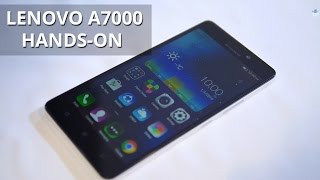