We’ve spent the last couple of years drooling over the idea of new smartphone form factors. Lately every single device we see is a just a typical flat slab, and even though some of these have gained some curves over time, it simply can’t replace the era of experimentation that we saw before the birth...
2015-08-05 13:15:00

LG today announced the Wine Smart flip phone with Android 5.1 Lollipop operating system. The new smartphone is designed as the global version of the LG Gentle that was recently launched in Korea. With a clamshell form-factor, the LG Wine Smart offers a combination of a folder phone and a touchscreen...
2015-08-05 15:26:59

LG’s Android Lollipop-powered Gentle flip phone is set to be released outside South Korea, with the company today confirming the handset will be known as the LG Wine Smart outside its homeland. Like others, LG is known to release a range of handsets exclusively for its home market and many expected the...
2015-08-05 15:07:27

LG has launched its new flip phone, the Wine Smart, targeting global consumers that are still attracted to the folder or clamshell design of phones. With the launch, the South Korean manufacturer is breaking away from the usual custom to launch flip phones only in its home market. The LG Wine Smart (2015)...
2015-08-05 17:05:44

Sometimes, you just have to go retro. That apparently is LG’s strategy with the release of its new clamshell smartphone, the Wine Smart, or as it’s known in Korea, the LG Gentle. Unlike the clamshell devices we used 10 years ago, though, the LG Wine Smart runs the Android operating system and carries...
Read all news (7)...

Well after a lot of searching I finally found the official stock firmware / rom V10B for my LG Wine Smart. I’d post it, as I’ve noticed plenty of other people having the same trouble updating via LG software updater. Download the LG Wine Smart V10B firmware on this site. It is highly recommended to...
Read all howto (1)... 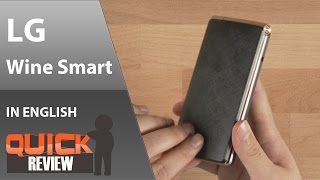 LG Wine Smart Flip New Smartphone Features Review Subscribe Us:- http://www.youtube.com/channel/UCkrJI_rNYcCs6Wlg10VGJfQ The South Korean company went ahead to officially announce the Wine Smart today, and to make things smoother, the phone runs on Android 4.4.2 KitKat — so basically, it’s a smartphone. Spec-wise, the LG Wine Smart features a one-side 3.5″ HVGA display which you can find under the flip cover. Powering the smartphone is a 1.2GHz quad-core CPU of an unidentified making. The phone further packs a gig of RAM, 4GB of internal storage and a removable 1,700mAh battery. LG Wine Smart has got 3.5″ of display loaded over the physical typo keyboard. You can also use its touch screen to scroll and type in between various tasks. On its camera side, LG has provided dual camera; 8MP on rear body and VGA camera on front for “okay type” selfies. It has got 4GB of internal storage along with an option to expand its storage via micro-SD card slot. LG Wine Smart measures118.6 × 59.4 × 16.9mm and weighs 140.8g. You have 2 different colour option to select from; one is white covered with golden sides and second is black, again covered with golden sides. LG has also made it LTE enabled for various carriers out there. This new Wine Smart has 1,700 mAh battery that is more than enough for a smaller 3.5″ display with 480×320 resolution. PT2M1S