Both tablets and black-and-white e-readers are selling like hot cakes. With the 70b, Archos has tried to combine the two - it's an Android slate with a resistive colour touchscreen, so it's also ideal for watching movies.

Like many Archos devices, the 70b has a handicapped version of Android that doesn't come with the standard Google applications such as Maps, Gmail and Calendar, as well as the Android Market. Unlike other Archos devices, it's not a trivial task to upgrade to the full version. We tried a couple of hacks available on the internet, but with no success.

Not only are the Market and other Google apps missing, but the home screen is locked to a single screen, with a bookshelf widget showing your ebook collection and four icons for the main applications - Video, Music, Photo and Browser - arranged across the top. There's no space for your own widgets, removing a large part of the Android home screen experience.

We also missed having hardware buttons for the common Android functions such as Home, Back and Menu, and a volume rocker. These are replicated by icons in the notification bar along the top of the screen. Also, we would have preferred it if the page turning buttons could have doubled up as Back and Menu buttons - as it is, they serve no purpose except within the ebook reader app.

When you first start the 70b, it prompts you to install some basic apps as well as Archos's AppsLib, the only app store available for the 70b. The new version of AppsLib is better organised and has better apps than previous versions we've seen, but it also has some notable gaps in it, such as the official Twitter and Facebook apps. Most Android 2.2 apps work fine on a tablet anyway, so we're not sure quite why Archos doesn't just use the Market.

archos 70B ereader this video show the archos 70B ereader as many people like me are looking for info about this "cheap" hybrid color ereader. PS: I didn t talk or edit music vids on the video so you can listen your music instead of blank =) I finally bought one for " fun" (wanted an ebook with color) and now messing around to see what can I do and more. Since every time I was looking for something I found random peoples over the web making reviews , videos .. posting infos on forum that help me a lot in my research, I wanted to share this one Enjoy ! so far: - temp root with z4root - home swither installed + zeam - slide me market - few apps side loaded and showed as working (opera mini , news republic, youtube, titanium backup, adobe reader 10.0 , gtab similock, google traduction ....) As you can see its a little more than a simple ebook reader =) so its does a decent job and its fast for a low cost device as you can see PT11M22S 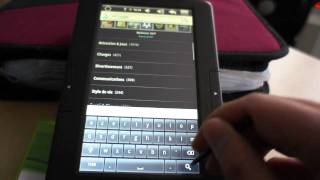